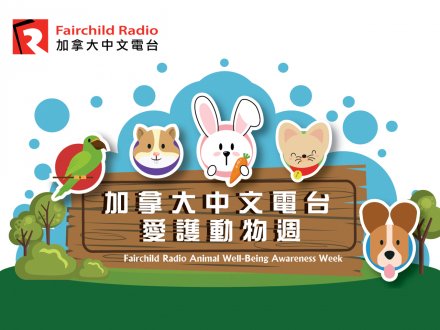 Further to a hughly successful "Fairchild Radio Animal Well-being Awarness Week" in 2018, Fairchild Radio, a multicultural radio network in Canada with local operations in Vancouver, Calgary and Toronto, organized the event for the second time in October 2019.  From October 5 to 11, Fairchild Radio aired specially produced programs in Vancouver (AM1470 & FM96.1), Calgary (FM94.7) and Toronto (AM1430 & FM88.9) to promote the protection of animal rights and the enhancement of quality of life for domestic, farm and wild animals.  Each station also created on-site or online events to raise funds for the animal welfare organizations in their own city.

From October 5 to 11, Fairchild Radio Vancouver has lined up a panel of veterinarians, animal shelter administrators and pet adopters from BC SPCA to appear on AM1470 & FM961 as special guests, sharing their expertise and experience in caring of abandoned or injured pets.

Then on Friday, October 11, as a finale for the "Animal Well-being Awareness Week", Team Vancouver organized a charity sale to benefit BC SPCA.  It wasn't an easy task to top last year's cookie sale. Fortunately a generous sponsor OOMOMO Japan Living stepped in and donated hundreds of cool innovative gadgets and stylish household essentials as charity sale merchandise. In a mere 4 hours, over $2,800 was raised and 100% of the proceeds was donated to BC SPCA to support their animal rescue and protection program.

This year Fairchild Radio Calgary FM94.7 teamed up with two non-profit organizations to promote animal well-being. Their first guest of honor was a pet ambassador from PALS (Pet Access League Society). Clifford, a 10-year-old Red Fox Labrador Retriever, is a four-legged celebritiy in Calgary.  He has visited many households and organizations to promote Pet Visitation Therapy.  Clifford and his caretaker Cindy visited the studio of FM94.7 and became an instant sensation at the radio station.

Then on Friday, October 11 from 1pm to 3pm, DJs and staff of Fairchild Radio Calgary set up a booth at a coffee shop named Cafe & Mi. On top of selling souvenirs to raise fund for AARCS (Alberta Animal Rescue Crew Society), the AARCS representatives were on site to answer audience's questions about pet adoption.

There is no shortage of animal lovers at Fairchild Radio's Toronto branch. In fact, their website www.am1430.com publishes articles about how to take care of pets year round.  During the "2019 Fairchild Radio Animal Well-being Awareness Week", Fairchild Radio Toronto had 22 of their pet-owning DJs share with audience stories about their pets. Some stories were hilarious (weird things their pets do), some were practical advices (how to make their other half and children cope with pets), and some were simply heart-breaking (the grief of losing a pet).

And to commermorate this year's "Animal Well-being Awareness Week", these 22 DJs submitted photos with their pets to create a thank you card, thanking their audience for all the support they have given to animals.