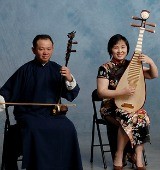 With guest performance by

The pipa??, or four-string lute, a lead instrument in traditional Chinese music, was introduced from Central Asia/Middle East to China as early as in the 2nd century AD. Instrumental counterparts could be found along the Silk Road, from the Kazahk dombra, the Persian and Turkish oud, to the European mandolin. The Tale of Pipa will showcase not only the musical capacity of this virtuosic and versatile instrument, but through pipa as a cultural ambassador, explore the intricate, multi-faceted (and sometimes surprising) relationships between Chinese and Persian music, presenting to the audience a journey through space, time and cultures.

The project will mark the first ever collaboration between the Vancouver Chinese Music Ensemble (VCME) and the Vashaan Ensemble which specializes in Persian music, and will feature renowned pipa performer Ling Yang and legendary singer Lili Lau. The concert will be loosely based on a story by local writer Sophi Liang about a Chinese princesses travelling with a group of tea merchants along the Silk Road during the ancient times, and will feature some rarely heard reconstructed pieces from the Tang and Song dynasties, instrumental music from the southern Chaozhou/Teochew and northern Shaanxi regions, recitation of classical and contemporary poetry, along with music composed/arranged by composer Alan Lau. The audience will also have the opportunity to enjoy various Chinese and Persian teas under the tranquil setting of the Sun Yat-Sen Classical Garden.

Aimed at exploring and presenting forms of Iranian music rarely heard in North America, the Vashaan Persian Music Ensemble was formed in 2011 and gathers together some of the finest classically trained Persian musicians in Canada to perform joyful and memorable Persian Traditional songs. The ensemble has since formed into a professional, close-knit group of musicians that continue to draw upon Iran’s rich musical past and explore the broad range of Traditional Persian Music styles and perform for a wide range of North American audiences.

Lead by its artistic director Jirong Huang, the Vancouver Chinese Music Ensemble is the first professional Chinese music group established in Canada. The ensemble performs an eclectic repertoire that embraces traditional Chinese and contemporary Canadian music. Its primary educational goal is to advance the understanding and appreciation of Chinese instruments, music and culture in Canada.

For more information check out www.vancouverchinesemusic.ca