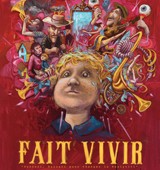 FAIT VIVIR follows the journey of the Montreal-based band Gypsy Kumbia Orchestra (GKO) on tour for nearly six years, travelling from one end of Colombia to the other. It is narrated by Manuk Aukán, the son of protagonists Carmen Ruiz and Sebastián Mejía, the founding members of the collective.
For more information about VLAFF events check out https://vlaff.org/