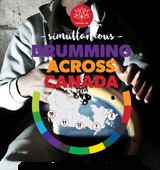 On July 1st, a countrywide drumming celebration known as the Canada 150 Atlantic to Pacific Celebration will celebrate Canada’s 150th anniversary of Confederation and the success of Canadian multiculturalism.

Through eight regions including Halifax, Montreal, Ottawa, Toronto, Winnipeg, Regina, Calgary and Vancouver, drummers will come together to drum simultaneously on July 1st.

This celebration will celebrate Canada’s 150th Birthday and hopefully, set a Guinness World Record for “Most Nationalities in a Drum Circle” of a recognized orchestral piece of music lasting at least five minutes. This is a new Guinness World Record that has not been attempted before, and we hope to be the first to set it!

This historic event will not only achieve a breaking record, but will also symbolize the unity of Canada and the celebrate Canada’s 150th Anniversary of Confederation.